The Kavkaz 2020 war game: the threat of attack or political pressure 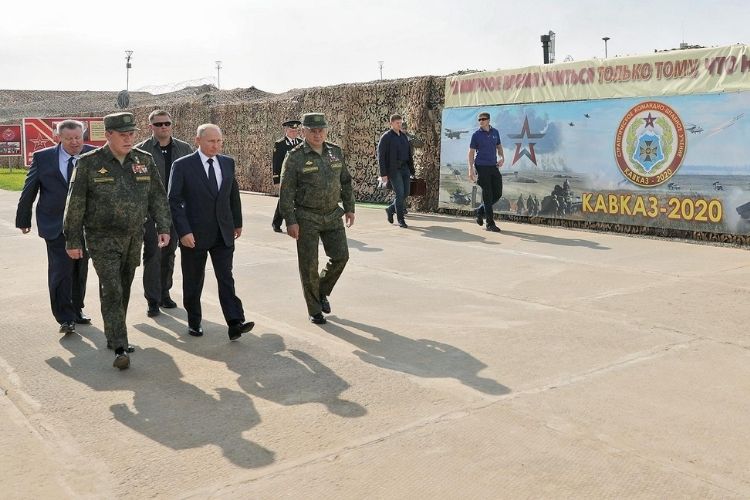 In September Russia actively arranges the strategic command and staff exercises Kavkaz 2020. According to analysts, it involves about 120,000 servicemen, about 500 tanks and 300 aircraft, ships of the Russian Federation Black Sea Fleet. In particular, the combat units of the Southern Military District deployed near Ukraine will be involved.

There is considerable power and danger near our borders, including the fact that Putin’s decree on conscription does not specify the terms of the latter.

Therefore, long before the war game began, the Ukrainian and foreign experts, as well as the representatives of the Ukrainian enforcement agencies, had warned about its potential danger. For example, the former commander of the US troops in Europe, the retired Lieutenant General Ben Hodges, in his interview in July this year suggested that the Kavkaz 2020 could be used to deploy Russian military intervention in Ukraine. The grounds for this may be the water problems in the occupied Crimea, as water is an essential element for Russian industry and military facilities on the peninsula. The issue of the impending «humanitarian catastrophe in the Crimea» due to the long drought was actively discussed on the Russian propaganda TV channels and Internet resources. In particular, this was announced on TV by Oleksiy Chesnakov, an expert from Surkov, who stressed on the humanitarian catastrophe as a possible reason for the use of military force (although there is no shortage of water for the domestic needs of the Crimean residents).

The Kavkaz 2008 war game was used by Russia to intervene in Georgia, when the aggressor’s tanks stopped just a few kilometers from Tbilisi. It is important that a relevant media image was created at that time, when the Russian Federation’s aggression was presented as a «compulsion to peace» of the Georgian party, which allegedly acted as an «aggressor» against Abkhazia and South Ossetia (although like both in case of official Tbilisi then, and in case of official Kyiv today, it is about the efforts of the sovereign government to restore the territorial integrity after the occupation of the territories by the aggressor). Therefore, even in the context of an open military invasion, Russia is trying to create for itself an image of the regional leader supporting of international peace and security. And, taking into consideration Putin’s active promotion of the idea of calling a summit of the nuclear club to discuss the key issues of the world order, he also has the ambitions of the world guarantor (despite Russia has different state of the economy and role in the international processes as it used to have the former Soviet Union, the legal successor of which Russia considers itself).

The aggressive policy of the Kremlin in the international arena is not only far from decreasing, but is even more radicalized. This is proved by the active militarization of minds of Russian population, the constant emphasis in official media reports on the development of the latest models of weapons, which reminds the Soviet rhetoric of the arms race period. In addition, the Russian authorities are more and more openly resorting to political assassinations or attempted murder — after the shooting of oppositionist Nemtsov in 2015 near the Kremlin, this year the oppositionist Navalny was poisoned, as it has already been proven, by the poison of Russian intelligence services «Novichok». Thus, we can witness the further collapse of the democratic institutions in Russia and the hybrid aggression in the international relations that hides behind the shield of the «peace and security guarantor».

The Kavkaz 2020 war game should not be underestimated or overestimated. On the one hand, an open invasion in Ukraine with its large territory and the condition of army which is far from the 2013 state can be too expensive for the Kremlin. Moreover, the West has a different attitude now and is aware of the unpredictable Moscow’s measures. On the other hand, the regional situation has become significantly worse: in addition to the increasing capacity and provocative actions of the Russian Black Sea Fleet, we have another aggravation of relations between Azerbaijan and Armenia in the Caucasus region. In addition to the Ukrainian issue so usual for the Kremlin, Belarus has recently become the number one priority due to the turbulent nature of the socio-political processes. A joint Russian-Belarusian military exercise «the Slavic Brotherhood» is held in Brest near the Polish border. About 300 Russian paratroopers have been sent to the exercise with the official statements that the exercise is «a response to the attempts to destabilize the situation in Belarus», referring to the Western countries (as well as Ukraine, which Lukashenko calls the one of those provoking chaos in the Belarusian society).

This context of regional processes explains why the military potential of the aggressor involved in the Kavkaz 2020 should not be underestimated. Moreover, the Kremlin leadership has repeatedly demonstrated its unpredictability and impudence on the international arena. However, meanwhile the military exercises look more like an attempt to intimidate and put pressure on Ukraine and its Western partners. And they will play the possible military intervention card in the context of difficult political negotiations resolving the situation in Donbass.