2008 war as a Russian propaganda against Georgia

An unprecedented event occurred in August 2008 — Russian troops crossed national borders and attacked a sovereign state for the first time since 1979. This attack was mainly launched by virtue of the negative development of Russia’s relations with Georgia and, more importantly, with the West. 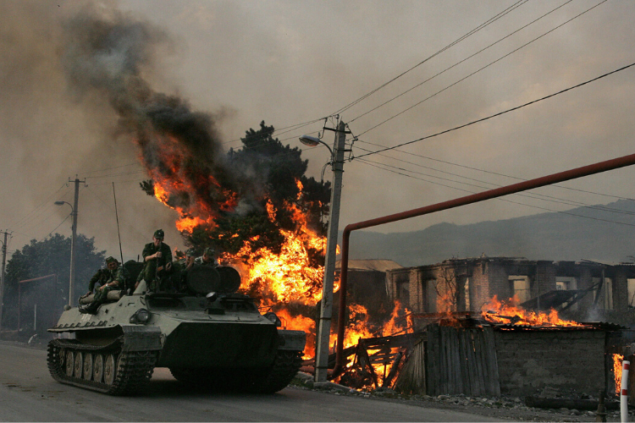 Subsequently the attack that seemed to have started on the Georgian territory of South Ossetia quickly precipitated the most significant crisis of European security in the last ten years, at that moment. This war was unexpected to the entire world. From a current perspective, actions performed by the leadership of the Russian Federation, after Kosovo being declared independent in February 2008, as well as Bucharest Summit in April, characterized the Caucasus on an excessive level.

A few months after these events, undoubtedly, the entire world, including analysts, focused more on the consequences of the war than on the war itself and its previous events. However, any analysis of the aftermath of the war is necessarily formed by the narrative we particularly receive from the events, and especially in their deeper historical context. In order to comprehend the war, it is of vital importance to understand the evolution of Russian-Georgian relations, and equally important, how they are interrelated with the West, particularly in the last two decades since 2008 war.

The Abkhaz-Georgian war of 1992-93, during which ethnic Abkhazians effectively occupied the territory of the Northwestern Georgia from Tbilisi’s control, is a largely forgotten event in the Western world, despite resounding ignition of the frozen conflict in August 2008. Considering Caucasian narrative, particularly individual perceptions of every ethnic group, we might argue both in support of the unity of Georgia and Abkhazia, as well as Abkhazian autonomy. The ethnic tension between the Abkhazians and the Georgians certainly existed, although this was not a sufficient reason of the conflict. The actions unfolded in 1992 could have been performed by virtue of Russia’s chaotic involvement before the conflict to alter tension into violence. The cessation of hostilities by Russia signifies that the reason and effect of conflict remained frozen solely to be severely thawed, in fact, fifteen years later.

The Abkhaz-Georgian conflict of 1992-93 is emphasized as one of the bloodiest and most unresolved, among those conflicts provoked by the collapse of the Soviet Union. Consequently, it caused thousands deaths of and resulted in the displacement of approximately 250,000 people. This dispute persisted without tremendous incident in the form of «frozen conflict» until 2008, until a large-scale Russian military intervention on the territory of Georgia again ignited hostilities and resulted in Moscow’s unilateral recognition of Abkhazia as an independent state.

Despite considerable pressure, exerted by the Russian Federation on the international society and its attempts to outline the events of August 2008 for its own benefit, everything was evident, even without examining details of Soviet, Georgian and public international law, it possible to state that Georgia did not attack the Republic of South Ossetia, because, apart from the fact that Georgia was not the first to open fire, this would be impossible for technical reasons, since South Ossetia had not been declared as a sovereign state on August 8, 2008. These territories within Georgia enjoyed uncertain status. (It is worth considering that Russia only recognized the independence of these states on August 26, 2008.)

Georgia suffered a resounding defeated according to three interrelated reasons: firstly, its de facto separation has currently become de jure, as Russia recognized the Republic of South Ossetia and Abkhazia as supposedly independent states and declared its readiness to defend them; secondly, Georgia’s prospects of eventually joining the European Union and NATO were postponed indefinitely, according to the evaluation by the Western world that after these events Georgia will not be able to satisfy the criteria of membership in the European Union for a long time or will not be able to be recognized as a stable, holistic state that can promote the security of the Atlantic Alliance; and finally, its leadership, tarnished its reputation in the West when Georgia allowed to be deceived by the Russian leadership.

After a long time when all countries could comprehend what was happening, it became evident that at the time Russian propaganda had worked effectively solely in Russia as such, as many states have not recognized the Republic of South Ossetia and Abkhazia yet (for free, apparently — none of them, except for Russia) years after the conflict. Although, it currently seems that the war provoked by Russia has not been finished yet as either the frozen conflict, or as the looted territories, or as the last shot, because the Russian Federation continues to discredit Georgia further.

In 2018, the question was posed, «Who started the war?» Georgian current government supported Russian propaganda to emphasize the relevance of this issue. The rhetorical question aroused to the answer to the previous one, «Intellectual immaturity or treason?» It was not necessary to seek the source of such ideology, because such statements undoubtedly coincide with the rhetoric of Moscow, which seized the opportunity to pollute the environment inherent in it misinformation.

The Abkhaz-Georgian war of 1992-93, having had today’s consequences, might be mostly considered as a result of parallel national liberation movements that contradicted each other, in particular, the Georgians declared their independence out of Russian control, while the Abkhazians sought closer relations with the Russians to assert their independence out of Georgian control. A rapid collapse of the Soviet Union, characterized by a significant transition period and political shift in Moscow, resulted in historical tension applied by Russia which launched the war to achieve its goals, particularly, to increase its territory and to satisfy its purpose of the gradual restoration of its territory. At the same time, it is complicated not to perceive the already formed narrative of this country, which is trying to become a liberator in any situation, thus, it will be protection against the Georgians, as if they might have launched the war, against the Ukrainians, who have oppressed the Russians, or it will be protection against the Western world, which threatens its faith, national values, identity, and in return might offer homosexuality, incest, spoiled lifestyle. We will not protect ourselves from this alone, only a powerful state is able to defend us from the aggressor called Russia.

Having failed to completely achieve its purpose in 2008, because of everyone’s disbelief, the Russian Federation has continued the information war, destroying the appearance its reputation as a state, creating an image of an enemy, and discrediting it by intervening from the outside or from the middle, and unfortunately Georgia serves it an example for the textbook.

As far as contemporary history is considered through dimming the gaze, through common implicit faith (historically being a weapon applied by Russia), through stereotypical thinking, about the temperament and traits of a nation, or through the defeat of the state, and even the assumption of righteousness by a world enemy, does it indicate intellectual immaturity or betrayal?