The Eastern strategic counteroffensive is happening in the geopolitical area stretching from the Black to the Baltic Seas and, applying the tools of hybrid warfare, in any part of the world whose explosion could contribute to Moscow’s global return. In this context, the three seas (Baltic — Black — Adriatic) is regarded to be a favorite geopolitical territory for Moscow’s political revenge: 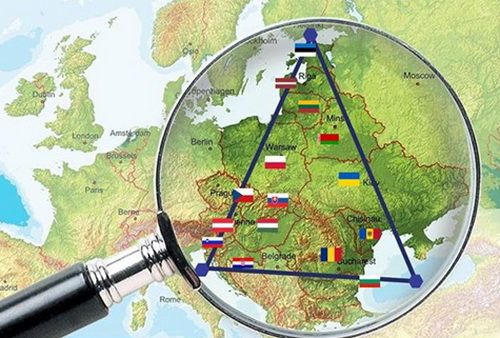 Russia still has significant geopolitical resources to sabotage the European project in the Balkans, politically blowing into the Baltic Sea through strong ethnic communities, and the Black Sea is considered to have created consolidation of its influence in the advanced western part of the sea, owing to the military build-up of recent years.

It is considered that the historically confirmed decision to cease the geopolitical return of the East in the space of the Three Seas is the consolidation of (European) groups in the well-known Polish project «Intermarium», recently transformed into the Three Seas Initiative. However, the Three Seas Initiative (3SI) does not have the potential for impressive outcomes in the short term in an area that still does not consider rapprochement and cohesion. A more practical solution, with significant recent accelerations, is the Bucharest Nine, a joint Romanian-Polish initiative with satisfactory results in terms of coordinating security positions on NATO’s eastern flank. More recently, the fragmentation of cooperation formats (referring to Lublin Triangle) is regarded to be an expression of the impossibility of uniting in broader formats than an expression of the real necessity for regional mini-formats.

As Europe has been seeking connections and working formats in its bewildered East, Moscow elegantly parades in this space, exploiting specific domestic issues, ranging from the necessity for local leaders to legitimize themselves through non-liberal models inspired by the East (Hungary), to reformatting and ideological upheavals in pro-Soviet circles of countries that have experienced the European mirage and lost it, partially due to the ambiguous behavior of their own pro-European political class (Moldova).

The geopolitical success of the East in this turbulent space might be consolidated in the upcoming period by maintaining the highest influence in Moldova after the presidential elections in December 2020, by international mediation of the Belarusian crisis, which will lead to Russia’s geopolitical consolidation in this country, by strengthening pro-Moscow administrations and southern Ukraine after the local elections on 25 October, due to an increasingly assertive policy in Montenegro amidst weakening pro-European political parties in the last parliamentary elections, by consolidating the attractiveness of illiberal policies on the eastern periphery of the European Union, due to the increasing divisions in NATO caused by some member states bordering the Black Sea (Turkey), etc.

Cohesion is the sole solution to peace in the region. However, it is regarded to be increasingly difficult to achieve both in the EU and (as recently) in NATO, as well as at the regional level. The East / Russia grows Pantagruellia from storms, has significant historical experience in provoking and benefiting from riots, its mirage is based on the myth of the firefighter, while the West, grown in the paradigm of geopolitical peace, is more resistant to such «atmospheric influences» than its eastern periphery it fails to omit constructions and rapid reactions. Against the backdrop of this regional turmoil, the prophetic US presence is becoming a major theme for the region’s cohesion. If the United States moves geopolitically, politically and militarily from Western Europe to its East, and especially if this trend continues after the November 2020 presidential election, peace in the region is considered to be assured, at least in the short term. We already have numerous visits to the region by senior US civilian and military officials, confirming the current US interest in protecting Eastern Europe from the «weather». The main topic for reflection in this direction might be the possibility of maintaining this interest in the event of a change of administration in Washington.

We are adamant that the US presidential election will also affect regional turbulence on the EU / NATO’s eastern border. Most likely (inclusively) the US decision to reconfigure its troops in Europe will be considered by the US administration regarding the results of the November 3 election.

At present, the structure of resistance in the Three Seas region is administered by political and military guarantees provided by NATO, in particular the United States. This structure of resistance de facto prevents Russia’s geopolitical advancement / return to the West. In these circumstances, we return to the obsessive question: is a personal contribution to the collective security of the countries of the region convincing, if the increasing deviation from the collective obligations of some countries identifies possible, but also significant risks to the security of the region?

The divisions between the countries of the region are becoming more frequent and numerous, considering the growing geopolitical turbulence in Trimoria. In the short term, the «Belarusian theme» might be extremely convincing for analyzing geopolitical trends that could shape the future of the region. (Priority) coordination of the positions of Eastern European countries as for Belarus (starting from the already manifested core, Poland — the Baltic States) can be equivalent to a strong geopolitical cohesion of Europe in the region. On the contrary, Russia’s unique (or dominant) role in the international mediation of the Belarusian crisis will mean that Europe’s rhetoric in support of the aspirations for freedom of the countries of this troubled East will remain a sign of blindness or reprehensible utopia for a long time.

These days, wider regional rates are being held in Minsk, and the format for resolving the crisis could be an important geopolitical indicator of future seismic activity in the region.

Success in the current regional geopolitical bid to protect / promote the Euro-Atlantic geopolitical project in the Three Seas region is implemented at four levels of geopolitical intervention: at the national level, it is vital to identify one’s own vulnerabilities applied to reduce confidence in the project; regarding bilateral relations, there is a huge potential for cooperation, which the countries of the region exploit modestly and conjuncturally, with constraints arising both from mutual historical grievance subtly sustained from the outside and through actual external disinformation campaigns (the solution might be to seize systemic diplomatic opportunities focused on pragmatism and sectoral cooperation); at the regional level, the existing formats are numerous and sufficient — instead of fragmenting them, the most effective solution is to pragmatically capitalize opportunities for cooperation in local, zonal, subregional, regional, transregional formats (implementation of additional «triangles» of cooperation might weaken the current coherence of formats), and at the global level, it is possible to entrust the support of the interest in this region expressed by some foreign geopolitical actors, without whom it is impossible to imagine the long-term preservation of current security achievements (USA).